Hive already comes with a massive collection of factory presets, but sometimes you need fresh inspiration, you are looking for that perfect sound for your project or would like to explore a new genre. We understand, and that is why we have been asking top sound designers to create exclusive new soundsets for Hive…

Save by purchasing all our commercial soundsets for Hive 2 at once!

From soothing background pads to edgy riffs, from playful experiments to bone dry leads, from soft cinematic textures to driving beats, plus a wide variety of familiar instrument types - you'll get it all.

The bundle includes the following soundsets: 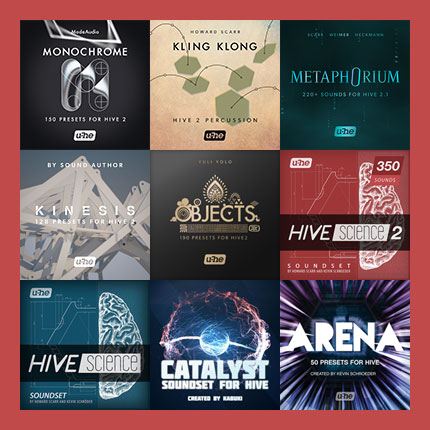 The concept was to create sounds that rhythmically "dance around each other" when layered, avoiding obvious repetition. Bryan makes good use of the version 2.1 features here: The extra filter modes are great for phaser effects and bizarre resonances, and the Shape Sequencer's new "Halt" option turns it into a kind of modulation mapper.

All Kinesis presets have XY pad control, and NKS audio previews are included. 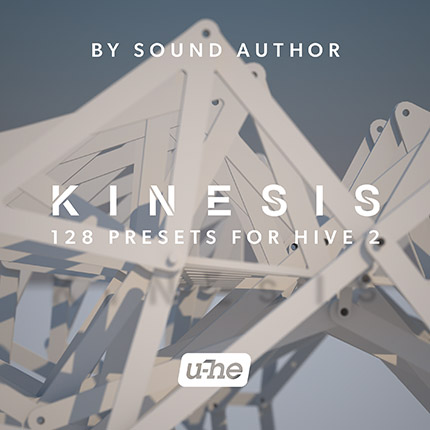 It Was So Simple Then

Waves glistening in the summer sun. All sounds from Kinesis. Track by Sound Author

Euphoric and uplifting. All sounds from Kinesis. Track by Hyboid

You Should Take Up Yoga

Metaphorium for Hive 2 contains 220+ presets programmed in-house by u-he team members Howard, Viktor (TUC) and Urs himself. The soundset includes a wide variety of rhythms, chugging basses, melodic loops, atonal and tonal pads, dreamy soundscapes, dramatic and ambient effects. However, meticulous XY pad programming in Metaphorium makes many of the presets defy categorization: You can create radically different versions with ease, bending presets so they become suitable for any genre of music.

Summer 2019: Composer Johnny Klimek approaches Urs about Zebra2 presets for a secret film music project. He describes the kind of sounds he is looking for, and asks Urs whether he knows of any u-he sound banks that would fit the bill - or failing that, the names of sound designers who would be capable of creating such presets.

After some thought, Urs recognizes the sonic gap in u-he's portfolio… u-he could make those presets themselves, to be released as a soundset after Johnny's project hits the cinemas. A win-win for both parties. For it to become a viable product, the soundset would have to be for one particular synthesizer: It was decided on Hive.

Autumn 2019: Viktor, Howie and Urs start programming new Hive presets. Urs adds features to Hive so that it can deliver all sound types Johnny described. Howie and Urs fly off to Gran Canaria to polish the sounds and integrate them into Johnny's workflow. Howie and Johnny sit together and tweak the presets until everyone is satisfied. By the end of 2019, a bank of over 200 presets is ready for the composers.

for The Matrix Resurrections movie! Clearly, this was the secret project! And sure enough, Hive features heavily in the score. 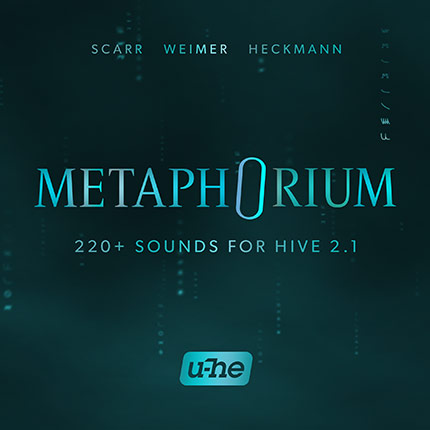 Urs Heckmann's Suite uses only Metaphorium presets, with plenty of modulation via mod wheel, aftertouch and the XY fields.

Picture yourself in a cathedral with an electric piano and a backing of analog synths. 100% Metaphorium sounds and effects.
Track by Hyboid

The glorious "Space Program 1978" preset with some pads and a bass drone. 100% Metaphorium sounds and effects.
Track by Hyboid

Yuli Yolo a.k.a. Nicolas Jaussaud hits the spot here with a specialist soundset. Almost all of the included sounds are about hitting, scraping or plucking things, with a strong sense of material throughout.

The 190 percussion instruments include many pitched mallets (realistic as well as fantasy), complex 'smashes' and several unique special effects. If synth percussion is missing from your palette of sounds, this is the one for you.

Objects for Hive 2 is NKS-ready, including audio previews. 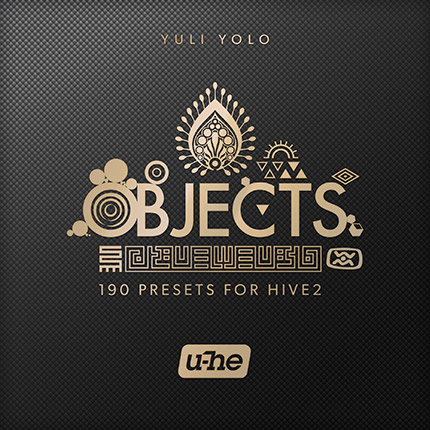 Created by Yuli Yolo, this short arrangement highlights the naturalistic tones of the soundset.

This walkthrough showcases some of Objects' melodic and percussive presets.

Arena is high energy. A compact soundset dedicated to a single theme. From the first to the last, these presets focus on lead sounds crafted especially for infectious melodies and dramatic riffs.

When developing Arena, Kevin Schroeder concentrated on creating sounds suited to the high energy of contemporary dance music. And these 50 presets certainly deliver: From searing keys to mood-altering plucks—Arena is high octane fuel for your club anthems. 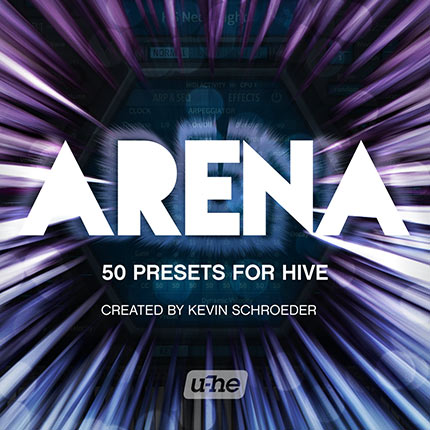 The sound of Arena

Deep groove with uplifting lead lines bouncing off each other.

Kevin cut his sound-design teeth on the Commodore 64 back in the 1990s. Now a well established freelancer (Access Virus, Roland Aira / JDXA) and demo composer, Kevin augments his mastery of “digital edge” with affectionate nods to analogue synthesizer history. You can hear Kevin’s creations in the soundtrack to Men in Black 3.

The rich undercurrents and history of the Tarot deck inspired Alexander Hacke’s unconventional new soundset for Hive: Tarot. Sonic motifs and themes wind throughout the soundset, guided by the meaning and interpretations of each card. Immerse yourself and let the sounds guide you, or find your own path.

Tarot divides sounds into suits rather than the more traditional categories, but you will still find plenty of bassy growls, dense textures, intense leads and intriguing sequences. Alexander Hacke’s mastery of sound design and his singular aesthetic in Tarot will provide hours of exploration in esoteric soundscapes. 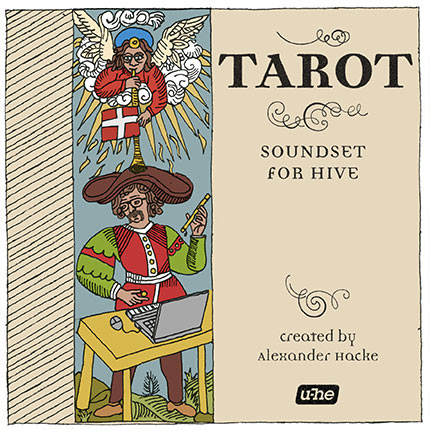 The sound of Tarot

The Minor Arcana presets shine in this piece from Alexander Hacke.

A musician and composer living in Berlin, Alexander Hacke joined the seminal industrial band Einstürzende Neubauten at the tender age of 14. Since then he has played in numerous influential underground groups, recorded and performed solo material, collaborated with countless artists in diverse genres and produced scores for theatre, documentaries and feature films. After fourty years in the business, Alexander Hacke continues to expand an already impressive, eclectic body of work.

Hive Science 2 puts the sound design expertise of Howard and Kevin at your fingertips. Dive into the analogue recreations from Howard, the cinematic styles from Kevin, and the results of their collaborations. 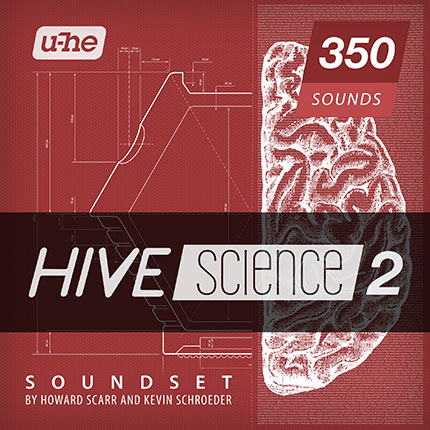 The sound of Hive Science 2

Kevin Schroeder delivers a soundtrack piece, a slow build with a triumphant end.

Howard Scarr: Howard has been tweaking synthesizers ever since 1973 when he co-founded the UK’s first all-synthesizer band Zorch. Four decades later, now a u-he employee, Howard’s obsession with synthesizers is unbroken. You can hear his Zebra2 creations in several blockbuster movies, including The Dark Knight, Angels & Demons, Inception and Dunkirk.

Kevin Schroeder: Kevin cut his sound-design teeth on the Commodore 64 back in the 1990s. Now a well established freelancer (Access Virus, Roland Aira / JDXA) and demo track composer, Kevin augments his mastery of “digital edge” with affectionate nods to analogue synth history. You can hear some of Kevin’s creations in the soundtrack to Men in Black 3.

Catalyst is a collection of 150 sounds from the library of DJ / producer Kabuki. These presets act as creative sparks for your next productions—delivering “ready to go” options or jumping off points for new ideas. Whichever direction you go, Catalyst acts as a powerful trigger for your imagination and explorations. 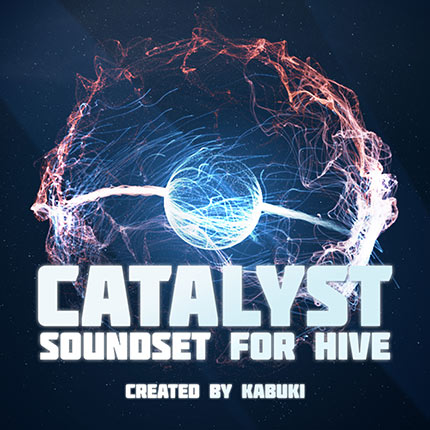 The sound of Catalyst

A dark, slow half-time influenced track by the soundset author, Kabuki. All sounds from Catalyst.

High energy rolling track in the classic drum ’n bass style. All sounds from Catalyst except the drum break and drum samples.

A synth pop and disco flecked electronic track by Oddvar. All sounds from Catalyst except the drums.

A veteran of Germany’s drum and bass scene, Kabuki has been manipulating breaks and grooves since the 1990s. Whether hip hop, juke, bass or jungle, he is always pursuing new beat experiments.

Hive Science by Howard Scarr and Kevin Schröder, a collaboration between two generations of sound designers at the top of their game. The 300+ presets cover a lot of ground, from edgy cinematic stomps through EDM essentials to brain-warping sound effects. This collection showcases the skill of the sound designers as well as the capabilities of Hive—perfect inspiration for your next track! 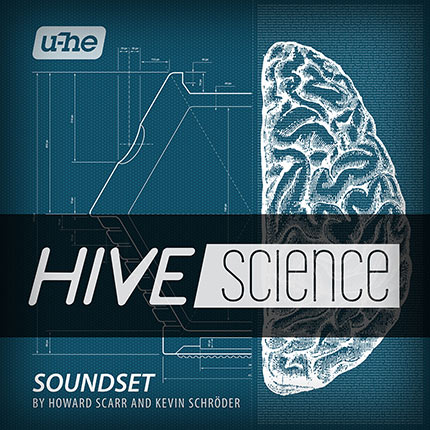 The sound of Hive Science

Howard Scarr: Howard has been tweaking synthesizers ever since 1973 when he co-founded the UK’s first all-synthesizer band Zorch. Over 40 years later, now a u-he employee, Howard is still obsessed with synthesizers. You can hear Howard’s creations in several movie soundtracks including The Dark Knight, Angels & Demons and Inception.

Kevin Schröder: Kevin cut his sound-design teeth on the Commodore 64 back in the 1990s. Now an established freelancer (Access Virus, Roland Aira / JDXA) and demo composer, Kevin augments his mastery of “digital edge” with affectionate nods to analogue synthesizer history. You can hear Kevin’s creations in the soundtrack to Men in Black 3.